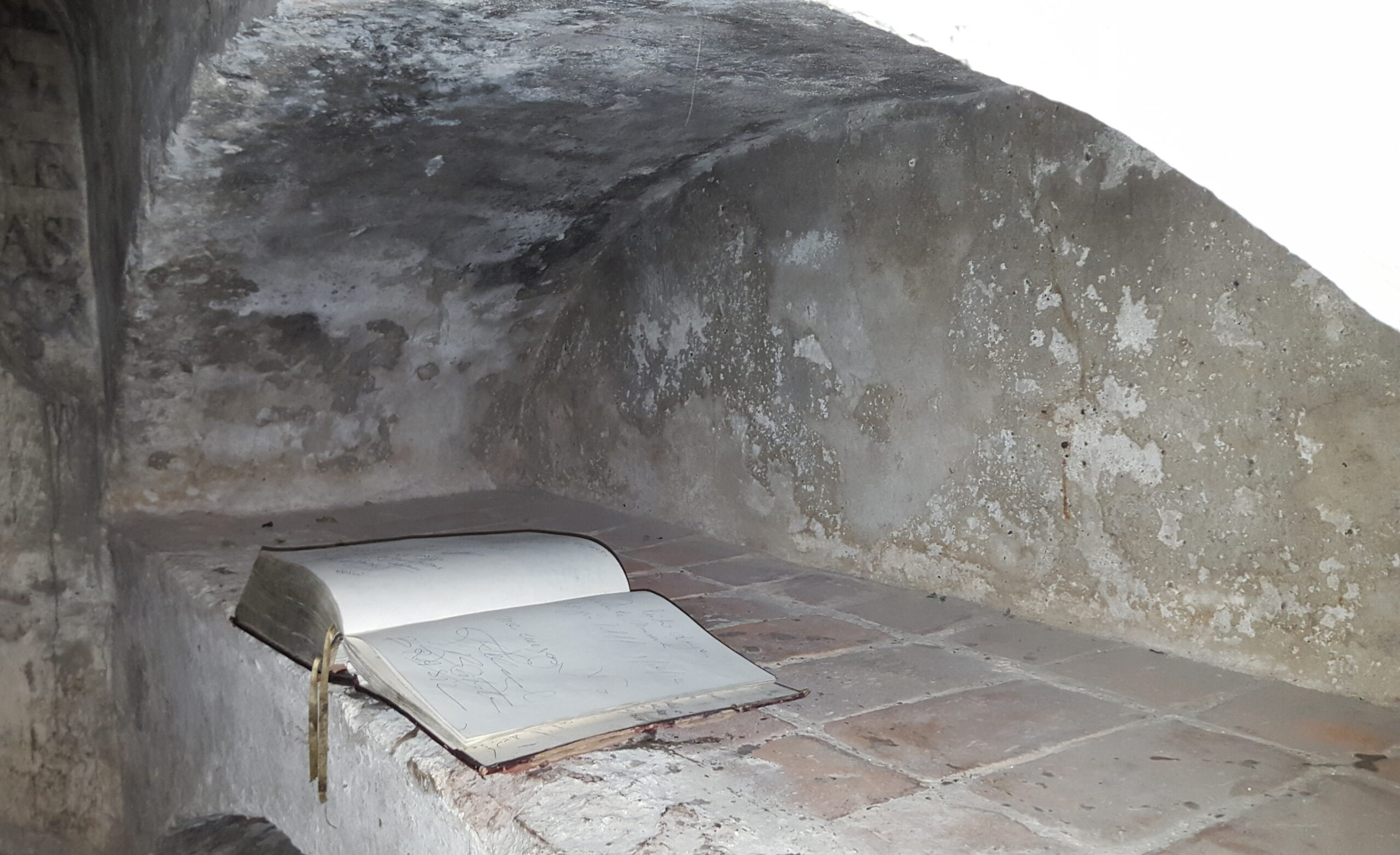 10 narrow yet sturdy steps protected by a barred gate that goes up to waist level and an area bordered by rectangular-shaped glass. That is all that separates a sunny and vibrant present from a mysterious and brooding past in the small coastal town of Cartagena.  The past is defined by the legend of Santa Clara and the palpable present is proliferated with stylish bar patrons sipping boozy cocktails just above an empty tomb.

Persons acted as if this UNESCO-protected burial site was just another fixture in the very well-appointed room. For me, three words came to mind. Mind-blowing. Weird. Creepy.

The unexpected juxtaposition of a crypt under a bar made my heart race a little and my flesh break out in goosebumps as I cautiously descended the stairs to see into the vault. Given my propensity for travel mishaps, I decided then and there that  it was decidedly not the time to inadvertently trip and enter flat on my face or butt.

Yes, you are piecing the puzzle together correctly! There is a crypt that doubles as an exhibition piece within a high-end Sofitel luxury hotel in Colombia. I have never seen anything like it on any of my travels before. When you visit Cartagena, go have a drink in their Bar El Torro or just pop inside like I did for a quick look around. The locals or your tour guide will gladly share the fanciful story of the girl that was buried there.

The legend, as written by Colombian Nobel-prize winner Gabriel García Márquez, is about a 12-year-old child called Servia who had long, unbridled copper hair. Born with her umbilical cord around her neck, her entrance into the world wasn’t easy and she went through life plagued with difficulty. Servia grew up with slaves, then later contracted rabies after being bitten by a disease-filled dog. In an effort to heal her, she was sent to the convent of Santa Clara to be taken care of by nuns, who, in their well-intended but misguided efforts  at finding suitable remedies finally resorted to exorcism, which is believed led to her death.

Before her passing, it is said that a priest befriended her and used to sneak out of a leper’s hospital regularly to see her.  When they met, legend has it that they ate and recited poetry together, although they were never sexually involved. Oddly, when Servia died Father Cayetano wasn’t around. The story ends with the incredible notion that her red hair continued to grow after her death.

All this BEFORE you even take one drink!

It’s no wonder the hotel attracts pampered guests and speculative and curious visitors from all around the globe.

Check back soon for more posts about my trip to Colombia.