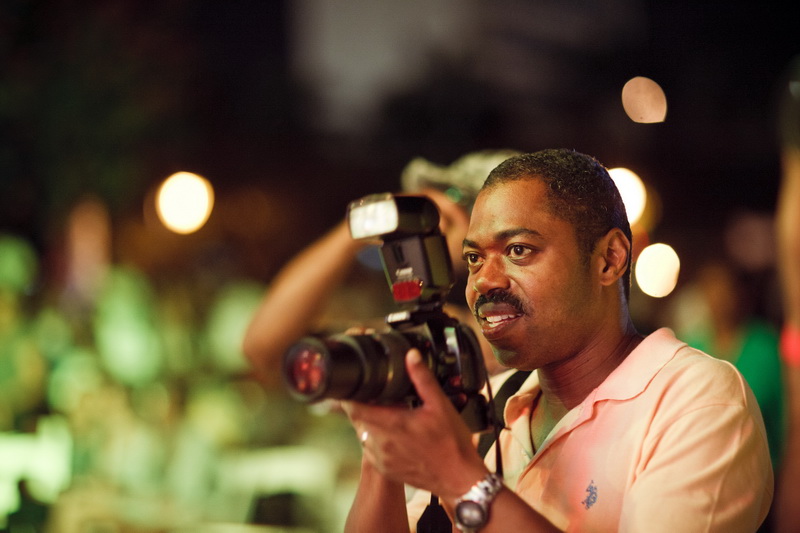 So far we’ve talked about international development, destination promotion and training jobs with travel benefits and the features have all been informative and fun reads.  This month we’re mixing things up a bit.

Like I said, the goal of this feature is to inspire people of different ages and backgrounds to explore various careers that can take them around the globe, so I feel it’s time to highlight a job in a non-corporate environment. Enter Steve “Semiyah” James, a Jamaican with many talents.

Steve, I know you have a solid educational background and several years of hard-earned private sector experience but you’ve always seemed to enjoy your hobby-turned business endeavors more. Am I right or wrong?

You’re right. I have an MBA and a bachelor’s degree, as well as significant experience in hotel management and telecommunications sales but outside of my family, the things that bring me the most joy involve reggae music (Lovers Rock in particular), entertainment and photography.

When I listen to you speak, I can sense the depth of your passion for those fields but for now, tell me about the photography.

I’ve had a fascination with capturing images for as long as I can remember. Before things went digital, I was the man who had 25 photo albums and whenever I got the chance, I would pull them out  to take a trip down memory lane with friends and family.

Were you taking the pictures or posing for them?

{He chuckled before responding} A bit of both but mostly the former. Back in those days, I would carry around four-tube flashes and keep stocks of 35mm film handy. I even remember taking a photography course in high school that involved huddling over negatives in a darkroom while my classmates and I learned how to use chemicals, controlled light and photographic paper to make the magic happen.

Let’s fast forward to today. I know a similar type of magic has taken you to some cool places and allowed you to photograph some very interesting people. Tell us about that.

Because of my photography, I’ve been able to visit places like Gambia; Manchester and London in the United Kingdom; and New York and California in the United States.

Some of my Caribbean trips have taken me to Guyana, Antigua, Saint Kitts & Nevis, The Bahamas, Saint Lucia, Saint Croix, Saint Thomas, Turks and Caicos and other countries as well.

In your typical down-to-earth and humble fashion, you’ve deliberately omitted any mention of the people you’ve photographed during those trips. You’ve traveled extensively with the famous Jamaican crooner, Beres Hammond, haven’t you? Who else has been a subject in front of your lens?

Yes, I have traveled with Beres as his personal photographer. Life on the road with him and his Harmony House family has been phenomenal.

Over the years, I’ve photographed numerous reggae and dancehall musicians both on stage and behind-the-scenes. My lens has captured established global icons like Jimmy Cliff, Steel Pulse, the late John Holt, Shaggy and Buju Banton. I’ve also taken pictures of up and comers like Chronixx and Jesse Royal, plus other stalwarts like Vivian “Sugar Love” Jones and so on.

What have been some of your favorite times?

I enjoy capturing the intimate moments the fans never get to see. The spontaneous times when the entertainers and band members are playing dominoes or when they are telling jokes on the tour bus and bantering with each other during a flight.

I also like taking nature shots in the destinations that I visit and getting up close and personal with some of the local food spots. I’ll be honest, in the latter case, the meals are usually so tasty I’ve often halfway through the food on my plate before I remember to snap a picture.

Do you find the time to explore?

Of course! You have to make the time for what you enjoy.  When I travel with Harmony House, we tend to fly to the location two days ahead of the event to make allowances for potential flight delays or other unpredictable occurrences. In between set up, sound check and show time, we leave the hotel and go in search of local experiences…and food.

When I travel on assignment, I have more time to myself so I check with the hotel staff for ideas on interesting things to see and do.

Are there any great stories you can tell us about traveling with a celebrity like Beres?

He’s a very private man but I don’t think he’ll mind if I share a few tidbits with you. When I travel with him, it’s a breeze getting through immigration and customs because he gets VIP treatment wherever he goes. A similar standard of service is extended to his band.  The longest wait time is the period in which the airport staff stops processing passengers in order to get their pictures taken with him. Believe it or not, sometimes all lines cease to move while they are getting their selfies. No matter how often I witness his effect on people, I am always amazed.

I also remember one incident where a fan got to meet him backstage. Just the actuality of being in the same room with her rendered her immobile. She was crying her eyes out. Beres called her over and gently spoke to her, and it was like watching a beautiful frozen statue melt as she gradually found her speech and regained control of her ability to move. It was a sight to behold!

One last question: can you tell us anything about him that most people wouldn’t know?

“Say what now?” I asked, with a twinkle in my eye.  I couldn’t outrun the thought that even with the amount of swag that President Barak Obama has, he better not put up too much of a resistance if the incomparable Beres Hammond gets to show Michele Obama ‘what one dance can do’.

In addition to his photography work, some of which has appeared in Billboard magazine, United Reggae.com. Reggaeville.com and on CD covers, Steve also hosts a radio show on Bess FM and organizes customized sightseeing tours around Jamaica that delve into the music and culture of the island. He can be reached via email at: semiyah@gmail.com and you can connect with him on Facebook and Instagram: @semiyahsteve.

5 Replies to “Traveling for work: Photographer﻿﻿”